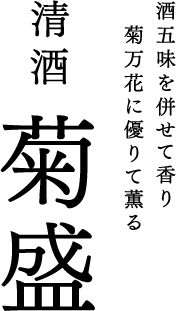 The most famous sake competition is the Annual Japan Sake Awards (Zenkoku Shinshu Kanpyokai) held by the National Research Institute of Brewing, where experts gather and evaluate a new sake from each brewery based on criteria such as appearance, aroma and taste. Sake that passes a test held in each local tax authority are gathered at the brewery laboratory of Higashihiroshima to conduct a scientific analysis and Kikizake (refers to evaluating the sake quality). Especially excellent sake wins a gold medal. Kiuchi brewery has received numerous awards since the first exhibition in 1986. 1988,1989,2001 Silver & 1990,1992,1998,1999 Gold

This is a new competition by the Sake Sommelier Association. It aims to promote the diffusion of sake outside Japan and to promote Japanese sake’s appeal in new forms to young Japanese consumers of sake. At the London Sake Challenge in 2013, our "Kikusakari Gekkakou" was a gold prize winner, "Kikusakari Asamurasaki" was a bronze prize winner.

This is a sake competition aiming to spread a new style of drinking sake from a wine glass to get past the boundaries between "young people", "western food" and "overseas". Kikusakari Junmaishu won a gold prize amongst 338 sake entries from 188 breweries.